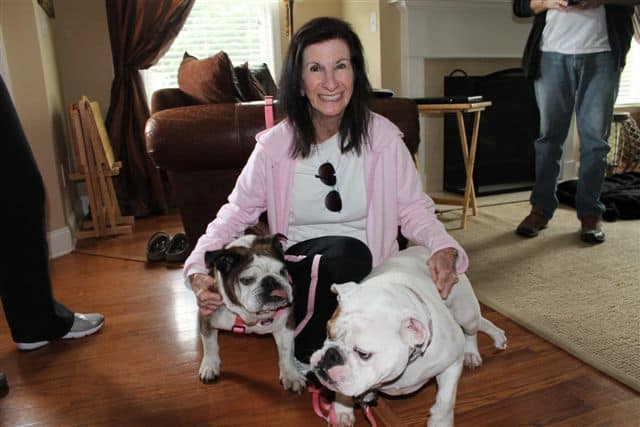 12/19/12: Meet Hilda, a senior girl dumped in a shelter in western Tennessee. Yes, it’s that giving time of the year!!! No worries, Hilda is going to have a wonderful Christmas and a Wonderful Life from this point on.  Thank you to the Jordan family for pulling her from the shelter and temporarily fostering her until we can get her to Atlanta after the holiday.

She’s a sweet girl and is getting along well with the Jordan’s other dogs. Thank Goodness for caring people is distant places who are willing to help out a bullie in need.  Thank you Mari DeCuir and the Jordan family.  We are not sure about Hilda’s health at the moment but looks like she has dry eye and possibly some ear issues.

Update 12/20/12: Note from temporary foster mom: This girl has been horribly neglected. Vision and hearing is impaired right now. Skin infected along with probably intestinal worms. Nails are so long it is making it difficult to walk. Poor precious soul.

She will be spending the night in the hospital then getting a dental procedure tomorrow. He teeth are really bad. On antibiotics to make her feel better. Will give updates as they come in. We originally thought she had impaired vision, but doesn’t seem to stop her from judging height from the floor to the couch or floor to the bed. She likes those creature comforts.

Update 12/26/12: Note from Hilda’s temporary foster Mom: I cannot believe the difference in Hilda! She can see so much better!! She’s not running into anything, she’s roaming around the house, looking at us, and her eyes look ten times better already. She has ointment for her eyes, an antibiotic, and the other I think is for her skin, maybe a steroid. Her breath is much better but it still has a noticeable odor. She looks like she feels so much better and I think she’s elated that she can see again!

Update 1/5/12: Hilda is here!  Thank you Cathy, Lindsey, Tracy and Andrea for getting her to Atlanta!

Hilda is tiny!  She only weighs 35 pounds.  She has a very small frame but can stand to gain a pound or two.  She is getting along fine with her foster sister Maggie but apparently likes to bark if ever left alone in a room at night.  Her foster parents are working on that and hopefully after a few more days of getting used to her surroundings it will stop.  She is going for a check up on Friday with Dr Rush and should be cleared for adoption then.

Update 1/11/13:  Hilda saw Dr Rush on Friday and got cleared for adoption!  He would like her to gain 3-4 more pounds.  She did test positve for dry in both eyes so we started her on tacrolimus.  She will need these drops for the rest of her life.
Update 5/11/13;  Hilda has been adopted!  Congrats Hilda and Gayle!

July 3, 2015:  Hilda, who was rescued in December 2012, crossed the rainbow bridge today.  She was left at the shelter by her owners two weeks before Christmas at the age of ten.  We welcomed her into rescue and gave her the best Christmas ever!  She spent the last 2 1/2 years surrounded by love.

Please keep her mother Gayle in your thoughts.